A Nail on the Wall

The story of Glenn Coon, Sr., and the ABCs of prayer ministry

WONDERFUL, wonderful, wonderful Jesus,’ ”he sang along with an enthusiastic audience on one of thousands of such nights. His singing sounded slightly off-key, but no one cared. His was a strong voice, full of passion—the voice of one who believes with his entire being.
The smiling, slightly balding man standing on the platform appeared to be a typical middle-aged evangelist. But his blue-checkered suit jacket hinted at a love for liveliness, and his age was close to 80. His name had a kind of mischievousness to it—Glenn Coon. He had joined four of his brothers in the ministry—Lester, Arthur, Clinton, and Miles Roy.
The Coon brothers evoked images of playful Disney-like characters, as I read about them. Lester, a longtime evangelist, still drives to speaking appointments at age 96. He is the last survivor.
His friends say Glenn Coon liked life simple. He and his wife, Ethel, traveled around the country in a motor home, a lifestyle that he referred to as “two Coons in a hollow log.”
His ministry required no complex theological doctrines. The secret of winning people to Christ, he said, was to love them. To those confused about the meaning of justification and sanctification, he simply said, “Focus on Jesus, and you will be saved.”
I recall the small red ABC books in our church library in San Diego years ago. At the pastor’s suggestion, I occasionally gave the books to the spiritually needy.
One day I read a copy. The message? Prayer works. 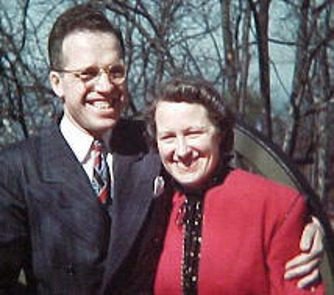 Ask Christ to fulfill a need,
Believe that He will, and
claim a Bible promise.

Sounds like a formula, I thought. I did hear that criticism of the method by those who preferred a more sophisticated God. Later I read of formulas from other Christians, using such terms as adore, believe, commit and similar variations. I concluded humans need ritual to remind them of God’s care and presence. Why else is prayer referred to as a discipline?
The apostles once asked Jesus, “Teach us to pray.” Humility accompanies such a request—an acknowledgment of what little we know. As modern prayer movements spread with new terminology, it’s good to remember that some Adventists taught prayer methods before prayer became popular.
One of the most prominent was Glenn Coon.

It’s unusual when someone produces more spiritual fruit after they retire than before, but people often say this of Glenn Coon. In 1956 he left denominational work after a bout with cancer, and he and Ethel began the ABCs of Prayer crusades. Coon brought to his work the experience ofevangelist, pastor, and missionary. Within a few years the
ABCs of Prayer began marching all over North America and then the world.
The seminar’s theme was “Jesus Only.” Coon determined he would not argue over doctrine. “That is not the spirit of Jesus. We must love them into Jesus,” he said.
“Soul winning,” he said,” is a love affair.”
People came to his crusades with problems and sorrows. And he taught them how to pray with faith. God might, but not always, change their circumstances. But God would always change them. He held healing services, telling people that as children of God they would be healed—“either now, later, or at the resurrection.” In these healing services people learned how to live and think healthfully,with Jesus as their focus. And immediate healings did occur for many during the quiet healing prayers.Wherever they went, the ABCs spread peace and joy, promoting positive possibility thinking through Jesus.
Glenn Coon, Jr., once declared that his father was a mixture of

Glenn Coon became a one-man Sunshine Band. But he would have shunned such a description, for he saw himself as only “a nail on the wall.”Each ABC meeting began with this special prayer:

“Lord, make me a nail upon the wall,
fastened securely in its place.
Then from this thing so common and so small,
hang a bright picture of Thy face. Amen.”

The meetings became known as places to be happy and full of joy- places for celebration long before the word carried any other connotations.

“ ‘Everything’s all right in my Father’s house
There is joy, joy, joy,’ ”
sang the people.

Coon practiced the presence of God. He tells in his book Path to the Heart that he would open the door of his car before driving off, and invite Jesus to ride with him.

Coon’s ministry spanned more than 60 years, during which he influenced a denomination and awakened it to the importance of simple prayer. He led thousands to Christ, and even led church leaders back to their first love.
Army chaplain Don Troyer lived in Thailand at the time he and his wife first heard of the “amazing new kind of prayer.” “It was the beginning of a wonderful odyssey That would change our family. Coon and company visited the school, And Nancy and I became a part of a wonderful church legacy —the ABCs of Prayer crusades.“I am only one of thousands that have been blessed and preserved for God’s kingdom because of this ministry. Nancy and I returned to the States for me to enter the seminary, pastor, and serve as a chaplain in the U.S. Army. All that time ‘the country preacher’ inspired me To preach the loving grace of a compassionate heavenly Father.”
Juanita Kretschmar, who became known for her work with the New York City van ministry, was hospitalized when Coon’s prayer message found her. “I was weak and bored as I lay recuperating in a hospital bed in Brazil. A fellow missionary brought tapes of Glenn Coon sermons. Listening to this man, chuckling at his answer-to-prayer stories, I was drawn to the simplicity of his message. In brief he said that anyone could take God’s promises and, as one of His children, present it to the Father, choose to believe, and already thank Him because it was as good as done. “Excitement grew in my heart. To open a Bible other than to prove something or teach a Sabbath school lesson was new to me. I devoured books by Coon. They made sense. God used those Spirit-filled messages with Glenn’s sense of humor, to entertain, educate, and draw me to the Bible. From that time, nearly 30 years ago, my life has been changed. Inner peace came after meeting with the Holy Spirit and being led to my Saviour on the cross. That peace has been renewed daily ever since. Prayer communion with God is real. On the human level, Glenn Coon was my mentor.”

The man, once so lively, sat in a wheelchair pushed by his daughter, Juanita, when Chaplain Chet Damron last saw him. Had his enthusiasms waned now that the dynamic energy had been quashed by a stroke in his last years? The chaplain tells us, “His smile and bright beaming eyes said ‘I remember you.’ He could now speak only one word, and he repeated it over and over as the chaplain talked with him—‘wonderful, wonderful, wonderful.’ ”

Glenn Coon died in the fall of 1996 at age 93. His son, Glenn Coon, Jr., has been carrying on the legacy of teaching the ABCs of Prayer seminars since his father’s stroke in 1987. Ethel Coon lives with her daughter, Juanita, and son-in-law, Charles, as did her husband before his death.
ABC assistants Ruben and Nancy Neuharth show Coon’s videos in churches. His books are available in Adventist Book Centers and from his daughter, Juanita Steffens, in Ooltewah, Tennessee, or you might find them in your church library left over from an ABCs of Prayer Crusade.

Ella Rydzewski is editorial assistant at the Adventist Review.